Visitation: Visitation will be Wednesday from 2 to 8 p.m. at Anderson Funeral Home in Canton. Family will greet visitors from 6 to 8 p.m. 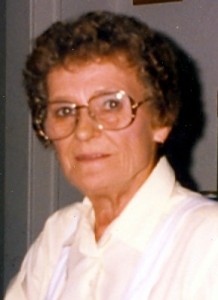 Huron.  Virgie Lee Gardner, 76, formerly of the Canton-Beloit area, died Sunday, June 16, at Sanford USD Medical Center.  Funeral services will be 11:00 a.m. Thursday, June 20, at Canton Lutheran Church.  Visitation will be Wednesday from 2 to 8 p.m. at Anderson Funeral Home in Canton.  Family will greet visitors from 6 to 8 p.m.

Virgie was born May 1, 1937 at Platte, SD to Jim and Eva (Enstad) Teeslink.  She attended grade school in the Black Hills and high school in Canton.

Virgie married Leo Gardner August 12, 1955 in Canton.  They lived in the Canton, Beloit and Fairview areas.  She owned and operated Virgie’s Café in Fairview, Newton Hills Drive-In, the Green Spade and a restaurant in Canton.  She was a caretaker for elderly in Lennox, Eagle Butte, Worthing, and Huron.  Virgie enjoyed camping, fishing, cards, dice, and having fun.

She was preceded in death by her parents, sister, Jane McCarty, brother, George Teeslink, sons- James and Leon Gardner, and 2 great-grandchildren, Leo and Madison.