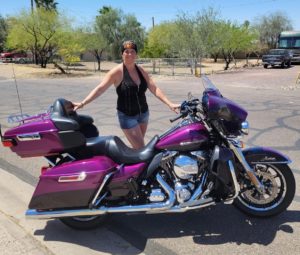 Sheri Lynn was born on December 16, 1972 in Sioux Falls, SD to Richard and Linda (Thompson) Gustafson.  Sheri graduated from Canton High School in 1991 and later earned a associates degree from Colorado Tech.

Sheri was a hard worker who was currently working as a Talent Acquisition Specialist for GPAC.  When she was not working, Sheri enjoyed 80’s rock & roll music, traveling, riding her motorcycle, and playing with her dogs, Lucy and Beast.  Family was her passion and she treasured time spent with them.  She was a proud mother and grandma (Peanut).

Sheri is survived by her children, Ashley (Cordell) Muilenberg, Jessica (Brett) Davelaar, Caleb (Shannon) Ekle and Kaylee Ekle; grandchildren, Hadlee, Kaden, Bentley, and a grandson on the way; her parents, Richard “Gus” and Linda Gustafson; brother, Stephan Gustafson; sister, Dawn (Jeff) Jacobs; significant other, Zach Wagner and his family; along with numerous other extended family and friends.  She was preceded in death by her grandparents and aunts, Debbie DeGroot and Cindy Hougen.

28 messages have been left