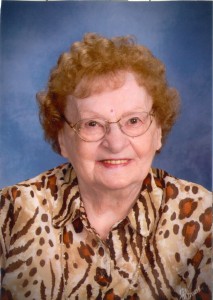 Services will be held at 11:30 a.m. Tuesday, May 5, 2015 at the Canton United Methodist Church in Canton, SD with the Reverend Steve Ziebarth presiding. Her burial will be in the Serviceman’s Memorial Cemetery in Mitchell, SD following the luncheon.  Family will greet visitors Monday from 4-6 p.m. at Anderson Funeral Home.

Lillian was born April 2, 1925 to William and Anna Grueneich of Monango, North Dakota.

She was an active member of the Linwood Wesleyan Church, Bible Study programs and a member of the Women’s Auxiliary.  She worked as a volunteer at the Veterans Hospital and received an Honoree Award for her 10 years of service.  Lillian also enjoyed traveling with her friends and loved working with flowers and crafts.

She was preceded in death by her husband, Wilfred Richter, three brothers, Willie, Albert, and Clarence Grueneich and one sister, Esther Iverson.

The family would like to express our heartfelt thanks to the Administration and staff at Stoney Brooke Suites in Dakota Dunes, SD who provided exceptional care, companionship and spiritual support. Your kindness and thoughtfulness you showed our mother will always be remembered.