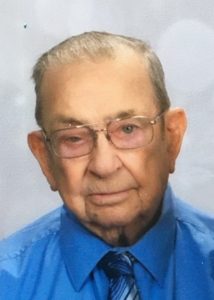 Lawrence was born on December 6, 1932 in Sioux County, IA to Gilbert and Matilda (Jeep) Ryken.  He grew up in the Hudson, SD area where he also attended rural school.  He married Hilma Kruse on December 20, 1952 in Hudson, SD.  The couple lived and farmed near Hudson until moving to Canton, SD in 1988.

In addition to farming, Lawrence also worked for Bi-State Fertilizer, Harknes Gravel, and did custom corn shelling.  After moving to Canton, he worked for the City of Canton in the Street Department for several years.  He enjoyed spending time with his family, restoring old tractors, and collecting toy tractors.  He has been a lifelong member of Hudson Lutheran Church, serving on the church council and ushering.