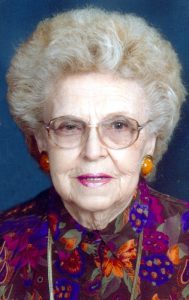 Doris was born May 3, 1925 on a farm near Canton, SD to Oscar and Ethel (Leonard) Johnson. She attended country school and graduated from Worthing High School.

Doris was united in marriage to Raymond Pedersen March 20, 1948 in Canton. They farmed near Canton, Doon, IA, and Ellsworth, MN, before moving back to Canton in 1960. Besides raising three children, Doris was a bookkeeper for their businesses, Pedersen Station and the Wheel. She also worked at Farmers Lumber, State Farm Insurance, and Gaspar Chevrolet. She was a member of Canton Lutheran Church and a life member of the VFW Auxiliary. She was very involved in her children’s and grandchildren’s lives and will be dearly missed. Her husband, Ray, died in 2008.