Visitation: Visitation will be from 2 to 7:00 p.m. Thursday at Anderson Funeral Home in Canton, with family present from 5 to 7:00 p.m. 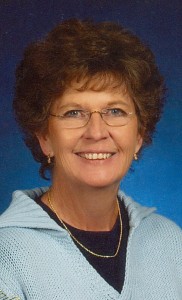 Carol was born April 28, 1944 at Luverne, MN to Kenneth and Luceil (Donaldson) Toms.  She attended school in Luverne, graduating in 1962.

Carol married Ervis Mulder in 1963.  They moved to Canton in 1964.  She worked at Witter’s Clothing Store for 7 years before beginning a 28 year career at the Lincoln County Treasurers Office.  She served as Lincoln County Treasurer from 1991 until her retirement in 2006.  Carol worked part-time for Kelly’s Services and was an assistant at the Canton City Hall offices for several years.  She retired from City Hall earlier this year due to failing health.

Carol was an active member of Canton United Methodist Church, serving on the church Administrative Board, Board of Trustees, Pastor Parish Board, and the Women’s Group.   She enjoyed traveling and going to Arizona during the winter the last 12 years with her special friend, Loney Gronskei.  While in Arizona, she attended a community college to take computer classes.  Carol was an avid reader and enjoyed playing the organ and crocheting.  She especially loved spending time with her family.

Carol was preceded in death by her parents, her brothers, Dennis and infant brother Toms; and her sister Mary Ann Bendt.

27 messages have been left