Visitation: Visitation for Bill and his daughter, Janet McCann, will be on Tuesday, January 4, 2022 from 5-7 p.m. at Anderson Funeral Home in Canton.

Service: A private family graveside service will be held for Bill and Janet on Wednesday. 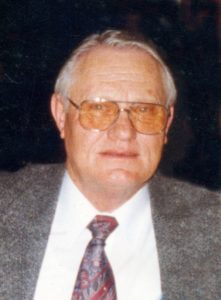 William “Bill” Martin McCann, age 95, died Thursday, December 30, 2021 at Dougherty Hospice House surrounded by his family.  Visitation for Bill and his daughter, Janet McCann, will be on Tuesday, January 4, 2022 from 5-7 p.m. at Anderson Funeral Home in Canton.  A private family graveside service will be held for both on Wednesday.  In lieu of flowers, memorials may be directed to the charity of your choice.

Bill was born on February 22, 1926 in Lismore, MN to Leo and Minnie (Tentler) McCann.  He attended country school and St. Anthony High School in Lismore, MN.  He then served in the Army 101st Airborne from June 1944 to May of 1946.  He married Helen Lynn on January 12, 1946 in Camp Pickett, VA.  After earning his GED, he obtained a degree in Power Engineering from Dunwoody Industrial Institute in Minneapolis, MN.

Bill began his 40-year career with Northern States Power in April of 1948 at the Weber Ave. Power Plant and the Hydro Generation Department in Sioux Falls, SD.  In June of 1948, he transferred to Bridgewater, SD, eventually becoming the District Manager.  In March of 1968, he transferred to Canton, SD to become District Manager.  He served the Canton area until his retirement on May 1, 1988.

While in Bridgewater, he was active in the American Legion, Disabled American Veterans and served on the Bridgewater School Board for 9 years.  In Canton, he was a past member of the Industrial Development Corporation, the Lions Club, the Rotary Club, the volunteer Fire Department, and the American Legion.  He was also a member of the SD Electric Union #949 for over 60 years and an active member St. Dominic Catholic Church in Canton.

Bill enjoyed fishing the Missouri river, traveling the US and parts of Europe, attended his children’s and grandchildren’s events, hunting, and playing pool.  Most of all, he enjoyed a night on the town with his wife of 69 years, Helen.