Visitation: Visitation, with family present, will begin at 5:00 p.m. Thursday at the funeral home. 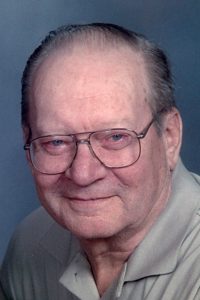 Wesley was born on October 10, 1931 in Inwood, IA to Otto and Amelia (Weberg) Kock.  He grew up in the Inwood area, graduating from Inwood High School in 1950.  He served in the US Army during the Korean War.  After his discharge, he married Betty Detmers on November 9, 1956 at Canton Lutheran Church.

During his life, Wesley farmed and spent over 20 years as a welder at Bid-Well.  Wesley loved baseball, especially the MN Twins.  He enjoyed reading, yard work, watching Family Feud, listening to the radio, and in his younger years, pool and bowling.  He could fix anything and made several metal John Deere toy tractors.

He is survived by his son, Paul (Amy Roseland), Canton, SD; daughter, Lynn (Scott) Jendersee, Harrisburg, SD; grandchildren: Lance (Abby) Roseland, Desi Roseland, and Finn Jendersee; sister, Marilyn Wickey, Sioux Falls, SD; along with numerous extended relatives and friends.  He was preceded in death by his wife of 49 years, Betty, his brother, Glenn, and his parents.