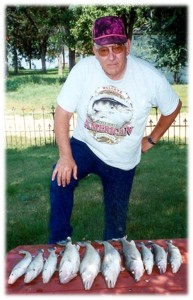 Wayne Hermsen, age 76, a long time teacher and coach, passed away Saturday, April 16, 2011 at Canton Good Samaritan Society.  Funeral service will be at 11:00 a.m. Wednesday, April 20, 2011 at Canton United Methodist Church.  Visitation will be Tuesday from 2:00 to 8:00 p.m. at Anderson funeral Home, with family present from 6:00 to 8:00 p.m.  Memorials may be directed to Canton Good Samaritan Society.
Wayne R. Hermsen was born April 17, 1934 to Isa (Tarr) and Albert Hermsen at Colome, SD and went to the Lord’s ball field on April 16th,  20ll at the Canton Good Samaritan Home.  Wayne grew up on a farm near Colome.  He attended rural schools, graduated from Colome High School, attended Southern State University and the University of South Dakota, being awarded his Master’s Degree in Education.  Wayne served as an educator for 40 years.
On March 1, l952 Wayne was united in marriage to his high school sweetheart, Marcella Vroman.  Wayne and Marcella were blessed with five children: Robbin (Arlene), LeMars, IA, Darcy (Rich) Hull, Hartford, SD, Darla (Jeff) Thomas, Gregory, SD, Rory (Jane), Freeman SD, and Darcella(Debra), White River, SD.  Ten grandchildren were an added blessing: Brent, Chad, and Carri Reilly, Kory Hermsen, John Enke, Lyndsi Hermsen, Chelsie, Brooke, Chet, and Taylor Hermsen.  Five great-grandchildren further expanded the blessings: Rhianna and Haley Thomas, Caileb Reilly, Remington Reilly, and Madison Hermsen.
Wayne had a love for life and people.  He never met a stranger he didn’t like and soon made them his friend. One of the greatest characteristics Wayne had was the way he could always remember people’s names.
Wayne had many interests in life, hunting, fishing, playing cards, visiting, helping neighbors and strangers, attending auctions, and teaching math.  But athletics were his first love.  He participated in four sports during his high school years.  Later on he found his true nitch, coaching.  He coached all levels of baseball from Peewee to amateur.  He coached the Canton V.F.W. Teener baseball team to the state championship in 1976, one of his proudest coaching moments.  Wayne served as V.F.W. regional baseball commissioner for over 40 years, always promoting what was best for kids and baseball.  He also coached all sports at the Jr. High level.  While playing, his players were noted for their work ethics, sportsmanship, team play, dedication and a winning attitude.  When not actively coaching, he enjoyed watching all sporting events, especially when his own children were participating and later on watching his grandchildren participate.
Some of Wayne’s achievements were introducing the micro alert system into the Canton area, playing Santa Claus for the little kids at Christmas, and serving the community as a member of the Lion’s club. He was a member of the Methodist Church, where he served as Superintendant for several years. He was a life time member of SDEA, and an honored member of the South Dakota Coach’s Association.
Wayne was preceded in death by his  father Albert, mother Isa, three brothers, Don, Delmer, and Al Jr., sister-in-laws, Jewell and Jenny, mother-in-law, Martha Kenaston, brother-in-law Ray Risseeuw, and his best friend, Buddy his much loved English Bulldog.
Wayne is survived by his wife, Marcella, their five children and their families, sisters-in- law Joyce Hermsen and Marsha Risseeuw, both of Winner, nieces, nephews, former students and athletes and a host of friends.
Wayne has gone to coach in a higher place, his influence will be felt in his family, his former students, members of his athletic teams, relatives and friends.
www.andersonandsonsfh.com