Visitation: Visitation will be Friday, October 23rd from 5-7 p.m. at Anderson Funeral Home in Canton.

Service: Private family services will be held on Saturday. A Zoom link to view the service can be found on our website 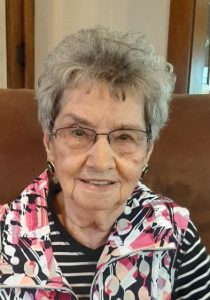 Vera Faye (Adams) Greenwood, age 91, died Wednesday, October 21, 2020 at her home in Canton, SD.  Visitation will be Friday, October 23rd from 5-7 p.m. at Anderson Funeral Home in Canton.  Private family services will be held on Saturday. A Zoom link to view the service can be found on our website.  In lieu of flowers, memorials may be directed to the Canton Pool Fund.

Vera was born on September 30, 1929 in Ethan, SD to Harry and Edna (Harvey) Adams.  She grew up in Ethan, graduating from Ethan High School.  She later attended cosmetology and business school.  She married Tom Greenwood on January 15, 1955 in Elk Point, SD.  The couple lived in Sioux Falls until moving to an acreage near Harrisburg in 1959.  They moved to Canton in 1995.

In addition to raising her children and caring for her grandchildren, Vera worked as a teacher’s aide in Harrisburg, at LifeScape, and owned and operated Big Shawnee’s Diner in Harrisburg.  Vera was an avid card player, enjoyed watching the Price is Right and Young & the Restless, talking to her sisters, attending plays at the Mitchell Playhouse and ordering gifts from mail order magazines.  She will be remembered for her pork cutlets with mash potatoes and gravy, her sour cream raisin pie and her coconut cream pie.  Vera cherished spending time with family, especially the Greenwood Christmas and trips to Missouri.

Vera was preceded in death by her parents, husband, Tom, in 2008, sisters Deloris Delzer and Eva Lingemann; and grandsons, Michael Greenwood and Nate Sandnes.

Anderson Funeral Home is inviting you to a scheduled Zoom meeting.