Visitation: Visitation, with family present, will be Sunday from 3-5 p.m. at Anderson Funeral Home in Canton. 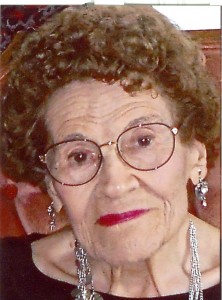 Thelma Sullestad of Canton passed away on June 16, 2016 at the Canton Good Samaritan Society at the age of 100.  Funeral services will begin at 2:00 p.m. Monday, June 20 in the Canton Lutheran Church Chapel.  Visitation, with family present, will be Sunday from 3-5 p.m. at Anderson Funeral Home in Canton.

Thelma G. Kauffman was born on September 9, 1915 in Scobey, MT to Irvin and Josephine (Keever) Kauffman.  At an early age her family moved to South Dakota where she spent her lifetime.

Thelma graduated from Canton High School in 1934 and attended Sioux Falls College where she earned her elementary teaching degree.  She taught for five years until her marriage to Clarence (Bob) Sullestad in 1941.  They made their home on a farm a few miles north of Canton until retirement.  In 1981 they purchased a home in Canton and lived there until 1999 when they moved to Sioux Falls.  Thelma recently returned to Canton.

Thelma was involved in vocal music groups and played piano and cello.  She was a member of Canton Lutheran Church and was an active participant until moving to Sioux Falls.  She was a member of Grieg Chorus Auxiliary and Extension Club.  She and her husband enjoyed traveling and spending time in warmer climates in the winter.

She was preceded in death by her husband Clarence in 2003; parents; sister, Marie Nannestad; and numerous in-laws.

Memorials can be directed to Canton Lutheran Church or the American Heart Association.