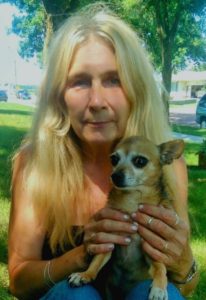 Early adulthood she moved to North Branch/Harris, MN where she met David Walters. They married, on April 23rd, 1982 in North Branch, MN. Shortly after, they had a son, David. He was her pride and joy. They moved to Pine City, MN to raise their son. They divorced in 1993. After David (son) finished school, Sheryl moved to Wilmer, MN. When her granddaughter Bailey was born, she moved to Canton, SD to be closer to family. This is where she spent the remainder of her days.

She spent many years working in factories, bartending, and breaking horses. Two things Sheryl loved in her life: her family and animals. She spent many hours doing arts and crafts, hiking, and being one with nature with her son and grandkids. In her earlier days she made a living breaking and raising horses but she was always known to have many pets. Cats, dogs, ferrets, birds, goats, cattle, and horses especially her horse Tash, and chihuahua Bella.

She was preceded in death by her former spouse, David D. Walters and both her parents.

Services will be held on Monday March 14th at 2 pm by Pastor Brian Quall at the Anderson Funeral Home in Canton, SD. Family will be available at 1 pm to greet guests. Honorary pallbearers: David Walters, Bailey Walters, Charles Walters, and Arnie Lundstrom.