Visitation: Visitation with family present will be from 5 to 7:00 p.m. Friday at Anderson Funeral Home in Canton.

Service: Funeral services will be at 1:00 p.m. Saturday, Sept. 14, at Grand Valley Lutheran Church, south of Canton, with burial at Forest Hill Cemetery. 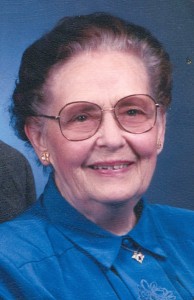 Canton.  Selma Esther (Anderson) Hanson, age 94, passed away Thursday, September 5, at the Canton Good Samaritan Society.  Funeral services will be at 1:00 p.m. Saturday, Sept. 14, at Grand Valley Lutheran Church, south of Canton, with burial at Forest Hill Cemetery.  Visitation with family present will be from 5 to 7:00 p.m. Friday at Anderson Funeral Home in Canton.

Selma was born in Sioux County, Iowa to Casper Melvin Anderson and Clara Regina (Loe) Anderson on December 17, 1918, on the family farm.  Selma started school at the age of 5, walking 2 ½ miles with her brother.  While attending Hudson High School, she played the violin orchestra and clarinet in the band, and sang in the glee club.  While at Hudson High School, she was named for the National Citizenship Award.  Following her graduation in 1936, she worked on the family farm.

Selma played piano with Selmer Hanson’s Dance Band until the band members were inducted into the military for WWII.  She married Selmer on February 22, 1940.

While working on the farm, Selma also worked at cafés in Canton, the Produce House, Sivesind and Opland Tax Preparation, Hunting Elevator and over 46 years in the office at Souvignier Livestock.

They retired from farming in 1982 and moved to Canton.  She as very active in Grand Valley Lutheran Church for over 60 years, and enjoyed the fellowship of the Sons of  Norway for many years.  Selma was preceded in death by her husband of over 70 years, Selmer, 5 brothers and 2 sisters.  She is survived by 2 sons, Dennis Hanson of Las Vegas, NV and Alan (Bonnie) Hanson of Anacortes, WA; 5 grandchildren; 5 great-grandchildren, 4 sisters- Sylvia Spelhaug, Canton, Nila Krenos, Marinett, WI, and Doris Krenos and Delores Gwinn both of Yankton, SD; and special friends and neighbors, Richard and Connie Bogue.