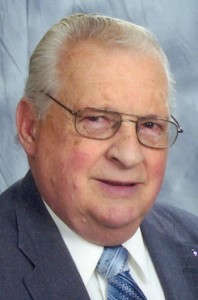 .  Rolland wishes were for memorials to be sent to the Gideon Org. in lieu of flowers.

Rolland was born March 9, 1932 in Freeman, SD to Erhart and Beatrice Stuckey.  He graduated from Washington High School in 1951. He served in the Naval Reserve.  He worked for Red Owl Food Store where he met his wife, Lucille Roskam.

He worked for Sunshine Food as meat manager for many years.  Rolland was president of Dakota Bandit Square Dance Club for many years.  He also enjoyed wood working and engraving.  He was very active with the Gideon’s up to the time of his death.

He was preceded in death by his parents, brother, sister, and his son, Jerry.

Rolland is survived by his wife of 63 years, Lucille; 7 children, 15 grandchildren, and 18 great-grandchildren.