Service: A Celebration of Life service will be held on Saturday, July 16 at 1:30 p.m. at Lands Lutheran Church, rural Hudson, SD. 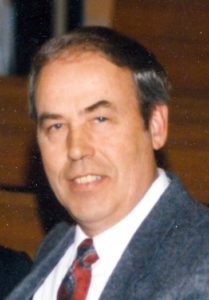 Bob was born on January 6, 1934 in Minneapolis, MN the second son of Gunnar Ingve and Lillian Ann (Naslund) Bergren.  Bob graduated from South High School in Minneapolis in 1951.  He attended Dunwoody Technical Institute until he enlisted in the US Navy, serving 4 years during the Korean War.

Bob worked for 23 years for IBM in Duluth, MN, Sioux City, IA, Poughkeepsie, NY, and Boulder, CO.  After retiring from IBM, he worked as a carpenter & Pro Shop manager.

His interests included sports and music.  He was a talented athlete, playing and coaching basketball and baseball for many years.  He sang in church choirs and choruses including the Grieg Chorus in Canton for many years.  He had the pleasure of singing with his son and grandsons in the Grieg Chorus.  He also sang many solos and duets with his wife, Helen and in quartets with friends.

Bob was a talented electrician and carpenter who remodeled two of their homes, including the Norway Center General Store.

He was baptized and confirmed at Augustana Lutheran Church in Minneapolis and attended Lutheran churches everywhere they lived, ending up at Lands Lutheran in rural Hudson, SD.

Bob was preceded in death by his parents, brother John, and son Todd.  He is survived by his loving wife, Helen; sons Scott (Kathy), Guy (Fran), and Lee (Joan); daughter-in-law Michelle; brother Allen; sister Carol; 16 grandchildren; 11 great-grandchildren; and a host of extended relatives and friends.