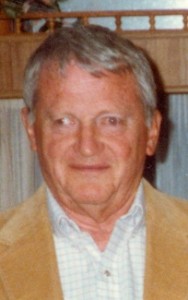 Gene was born November 26, 1916 in Illinois to Walter and Stella (Masters) Escher.  He attended Wentworth Military Academy and Junior College in Lexington, MO.  Gene graduated from Drake University in Des Moines, IA.  He served in the U.S. Coast Guard during WWII.

Gene was united in marriage to Sally Fredrikson Asper on August 19, 1978.

A resident of Sioux Falls since 1974, Gene worked in finance and retired as a vice president of Piper, Jaffrey, and Hopwood.  He and his wife moved to Canton in 1984.  In retirement, he enjoyed a daily round of golf and exercising at Dr. Swenson’s gym.  Earlier in his life, Gene showed Arabian horses and was a longstanding member of the Arabian Horse Association.