Visitation: Visitation, with family present, will be Sunday from 1-3 p.m. at Anderson Funeral Home. 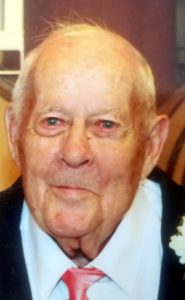 Richard Henry Lien, age 92, passed away peacefully on February 3, 2021.  Private family funeral services will begin at 10:30 a.m. Monday, February 8 at Redeemer Free Lutheran in Canton.  Visitation, with family present, will be Sunday from 1-3 p.m. at Anderson Funeral Home.  A link to the livestream of the service can be found at www.andersonandsonsfh.com

Richard “Dick” Lien was born in Canton, SD on November 17, 1928 to Henry and Dagny Lien.  Dick attended Canton High School and graduated in 1946.

Dick was united in marriage to Jeanette Roecker on April 8, 1951.  He joined the Marines in 1951 and served in the Korean War earning several honors.  One of his favorite experiences was attending the Midwest Honor Flight to Washington, D.C. in September 2019.

After returning to from the military, Dick farmed in Canton for several years and served on the Canton Fire Department.  Dick also drove bus for the Canton School District and served the Lincoln County Veterans Officer until his retirement in 2015.

In lieu of flowers, any condolences can be directed to the Midwest Honor Flight:  509 4th Avenue NE, Sioux Center, IA 51250 or www.midwesthonorflight.org.