Visitation: Visitation will be Thursday from 2 to 8:00 p.m. at Anderson Funeral Home in Canton, with family present from 6 to 8:00 p.m. 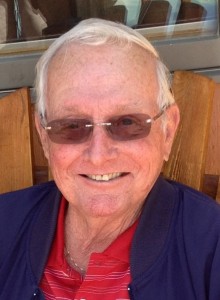 Richard K. “Dick” Haisch, 80, passed away Monday, April 6, 2015 at Sanford USD Medical Center in Sioux Falls.  His memorial service will be at 10:30 a.m. Friday, April 10, 2015 at Canton Lutheran Church.   Visitation will be Thursday from 2 to 8:00 p.m. at Anderson Funeral Home in Canton, with family present from 6 to 8:00 p.m.  In lieu of flowers, memorials may be directed to the Canton Lutheran Basement Renovation Fund or a charity of your choice.

Richard Keith Haisch was born August 28, 1934 at Webster, SD to Lloyd and Marian (Mulford) Haisch.  Dick graduated from Canton High School in 1952.  He received a degree in pharmacy from SDSU in 1956.  While at Brookings, he was a member of  ROTC and served in the US Army for two years as a 2nd Lieutenant.

Dick was united in marriage to Maureen Kay Anderson July 9, 1956 in Canton.  They lived in Albuquerque, NM and Phoenix, AZ before moving to Canton in 1960.  Dick was a pharmacist and partner at Molstad Drug for 5 years and a partner at Bruggman Drug in Rock Rapids for 2 years.  He purchased Noid Drug Store in 1967, changing the name to Haisch Pharmacy, which he owned for 26 years.  He retired in 1996.  Dick was an active member of Canton Lutheran Church since 1960, serving in stewardship, as a deacon and trustee, and sang in the choir.  He was also very involved in the community as a member of Chamber of Commerce, Lions Club, Masonic Lodge, Canton-Inwood Hospital Board, Canton Good Samaritan Advisory Board, and Canton Development Corporation.  He was a consultant pharmacist for the nursing and hospital for 10 years.  He was a member of several state and national pharmacy association s.  Dick and Kay enjoyed spending their winters in Arizona for over 20 years.   Dick was an avid golfer and enjoyed photography and woodworking.

23 messages have been left