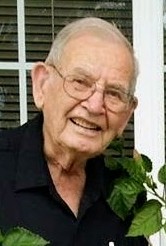 Reynold Clarence Eneboe, 98 years old, went to his Savior and heavenly home on June 15, 2020. This past weekend his family celebrated his life and the lessons we learned from this man of quiet faith and strength. They and all who knew him will strive to carry on his legacy of Christian friendship and caring for others in their own walks of life.

He was born on October 6,1921. He was brought into this world on the family farm, and delivered by his Aunt Lena to his parents, Rudolph and Ella Birkland Eneboe. Family and farming began with his first breaths and continued in his DNA for the rest of his life.

He attended Highland #24 Rural Grade School (at one time it was referred to as the Eneboe School, as the majority of students shared that name) and graduated from there and from Canton High School. He enjoyed and played many sports. He was a Merit Scholar and was especially proud of his FFA participation and served in the office of State Treasurer for the organization, He felt honored to serve in the Army Air Corps as a Radio operator and Machine Tail Gunner. He remembered many flights and friends from his service. After his honorable discharge he attended Lutheran Bible Institute where he met the love of his life, Lois Esther Anderson. They were married on September 1, 1951 and were great teammates for 63 years.

Reynold and Lois began their life together on a dairy farm in Wisconsin and a year later were blessed with a son, Ruel Peter. The flatlands of South Dakota called them back and they had twins, Randi Kay and Ronald Ray and moved to the Eneboe farm, where his grandfather had homesteaded with a tree planting grant.

Reynold was blessed to have served on many boards and committees at Romsdal Church, Highland township, Canton Elevator, and Farmers State Bank. Reynold almost always tried to talk to neighbors, family and even invited sales people in for coffee or a meal with the family. He was always ready for a game of cards, never met anyone he couldn’t talk to, or try to make smile. He had a special love for children and they for him. Most of us enjoyed his famous hand shake.

Reynold had a quiet unassuming faith and served Jesus in the same way. He never wanted the limelight, but always held strong to his faith, giving generously of his time, talents, and finances. He was always willing to lend a helping hand and his Bible and devotional book were on his kitchen table or nightstand for regular reading and prayer. Reynold enjoyed sending birthday cards, anniversary cards and thank you cards. His favorites were the “Peanuts cards”, as they too, gave a smile and had a Bible verse that would bless the recipient.

In his retirement, Reynold and Lois moved to Canton and enjoyed being snowbirds with family and friends in Texas and Arizona. They traveled with, or to see, family and friends at many wonderful destinations, enjoying trips to most of the states including: Alaska, and Hawaii. They also went abroad to Liberia, Switzerland, England, Canada, Mexico, and Norway.

He was truly loved, appreciated, and will be missed by his children: Randi and Gary Helder, Ron and Darla Eneboe, and Shelley Eneboe. His grandchildren: Tyson and Meghana Helder; Rikka and Dusty Koele; Kyle and Kaitlin Helder; Nick Eneboe and Anna Dizon; Kelsey and Dave Kroon; His Great Grandchildren: Cadence, Camdyn, Casey, Mya, Emery, and Elia. His sisters-in-law: Carol Matson, Alydia Anderson, brother-in-law Bill Myers, and his many nieces, nephews, cousins, and friends.

Private family services were held.  The family would like you to consider giving a memorial gift to Center of Hope or Children’s Rescue International in memory of our beloved Dad/Grandpa/Great-Grandpa. Please also consider sharing Jesus and your friendship with others as he so faithfully did.