Visitation: Visitation will be Tuesday from 2 to 8 p.m. at Anderson Funeral Home in Canton, with family present from 6 to 8 p.m. 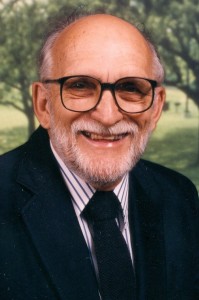 Canton.  Rev. Wayne L. Rager, age 85, a former Methodist pastor in South Dakota, passed away Friday, June 7, 2013 at Sanford Centennial Hospice in Sioux Falls.  Funeral services will be 1:30 p.m. Wednesday, June 12, 2013 at Canton United Methodist Church, followed by burial at Forest Hill Cemetery.  Visitation will be Tuesday from 2 to 8 p.m. at Anderson Funeral Home in Canton, with family present from 6 to 8 p.m.

Wayne was born October 1, 1927 at Crofton, NE, the son of Clarence and Florence  (Zurcher) Rager.  He graduated from high school in Dallas, OR and later from Yankton College.  He then completed seminary school in Washington, D.C.

Wayne was united in marriage to Mary Ann Damm July 31, 1949 in Yankton.  They lived in several cities in South Dakota (Irene, Scotland, Tyndall, White, Hitchcock, Canton, Sioux Falls, and Madison) where Wayne served as pastor. He also served as a pastor in Huntingtown, MD.  Wayne retired in 1990.  Wayne enjoyed spending time with his grandchildren.  He also enjoyed his pets, raising Bantam chickens, and compiling information for his family’s genealogy.  Wayne a member of the Canton Masonic Lodge and served on the Colonial Village board of directors.

Wayne is survived by his wife of 63 years, Mary Ann; two sons, Daniel (Linda) Rager of Sioux Falls and Tom (Deb Simunek) of Luverne, MN; 5 grandchildren; and 6 great-grandchildren.  He was preceded in death by his parents, his son, David, and two sisters, Pat and Sherrie.