Visitation: Visitation, with family present, will be Thursday, June 30 from 5-8 p.m. at Anderson Funeral Home in Canton, SD. A time of sharing will be held at 7:00 p.m.

Service: Funeral services will begin at 1:00 p.m. Friday, July 1, 2022 at Brandon Valley Assembly of God Church in Brandon, SD.  Private family burial will take place prior to the service. 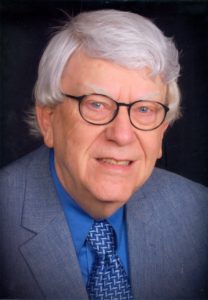 Rev. Clarke E. Gage, age 88, went to his eternal reward on Thursday, June 23, 2022 at Ava’s House in Sioux Falls, SD. Funeral services will begin at 1:00 p.m. Friday, July 1, 2022 at Brandon Valley Assembly of God Church in Brandon, SD.  Private family burial will take place prior to the service.  Visitation, with family present, will be Thursday, June 30 from 5-8 p.m. at Anderson Funeral Home in Canton, SD.  A time of sharing will be held at 7:00 p.m.

Clarke Everett Gage, the youngest of 11, was born on April 11, 1934 to Wells Herbert Gage & Wilhelmena Augusta Sophia (Peter) Gage of Page, ND.   His first years of life were on a farm near Page, ND.  Clarke and his parents then moved to Valley City, ND, where he lived until leaving for college.  For his high school years, he attended State Teachers College in Valley City, ND.  After high school, he worked at a floral shop in Valley City where he learned floral design, with plans to purchase the business, however, God had other plans for Clarke.  He spent a summer in Alaska as the soloist with an Evangelistic Team, and then in the fall of 1955 he enrolled in the Pastoral Studies program at North Central Bible College in Minneapolis, MN, graduating in 1958.   It is there that he met the love of his life, Carolyn Joyce Pederson.  They were married June 8, 1956 at the Gospel Tabernacle, Sioux Falls, SD.  While at North Central, he was on staff at Bethel Assembly of God, Minneapolis, MN under Rev. Bob Hanson, he represented the college as part of the college quartet, was regularly featured as the soloist for various evangelical city outreaches, as well as, worked for Bachman Floral as the head floral designer.

In 1958, Clarke and Carolyn moved to Beckley, West Virginia to serve on staff with Rev. T.M. Waldron, where Clarke was the general assistant and youth pastor at First Assembly of God. They were also involved with daily radio and weekly television programs.  In 1961 Clarke was ordained with the Assemblies of God.  That same year they moved to Luverne, MN, where he pastored and they had a weekly live television program, “Chapel Time”, which aired on KSOO Saturday evenings at 6:00pm.  Chapel Time had a larger audience than “The Lawrence Welk Show” that aired during the same time on a competing station.  In December of 1965, he accepted the pastoral call to Crosby Assembly of God, Crosby, MN.  They continued Chapel Time on KSOO for one year after leaving Luverne, MN.  While in Crosby, he produced a weekly and daily radio program on KKIN out of Aiken, MN.  In 1973, he accepted the invitation to pastor First Assembly of God in Sisseton, SD. They then moved to La Crosse, WI in December of 1974, where he pastored First Assembly of God La Crosse, and did a weekly radio program there as well. This move accommodated the educational needs of their youngest son, who was deaf.  In June of 1978, he began pastoring Evangel Temple in Moorhead, MN, where he pastored for the next 21 years.  While in Moorhead, he wrote and recorded thought provoking one minute radio spots that aired daily on KQWB FM, the Classic Rock Station in Fargo-Moorhead.   In 2000, when he was 66, Clarke and Carolyn became missionaries, pastoring the Moscow International Assembly, and teaching at the Assembly of God Seminary in Moscow, Russia.  Following their time in Moscow they then served in the capacity of Pastoral Care for missionaries for all of Eurasia, with a retreat center, “Shepherds Cove,” located on the Baltic Sea, outside of Tallinn, Estonia.  They continued Shepherds Cove virtually from Onalaska, WI and Harrisburg, SD.

Clarke was a beloved husband, father, grandfather, & great grandfather.  He was a man of few words, but when he did speak it was well worth your time to listen to what he had to say.  He was a mentor to many.  He was a man of character, integrity, wisdom, full of faith and good old common sense.  He had a great sense of humor and knew how to fix almost anything.  Clarke fought the good fight, finished the race, and remained steadfast in his faith and his commitment to serving Jesus Christ.