Service: Memorial services will begin at 1:00 p.m. Friday, November 22 at Canton Lutheran Church. Private family burial will take place prior to the service. 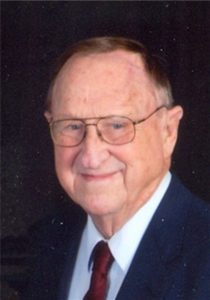 He graduated from Larchwood High School in 1949 and from Iowa State University in 1956.  He married Rosamond (Roz) Hohman on June 16, 1956.  They were married for 48 years and they were thankful to have raised their five children in Canton, SD.  He started his veterinary practice in Canton, SD after spending two years in the Army in Virginia.  Roz died on December 4, 2004.  Paul married Marlys Ahrendt on June 24, 2006 and they enjoyed Brant Lake and each other’s families.

Paul’s veterinary career began when he moved to Canton and joined Bob Freeman in 1959. It was a large animal practice and “house calls” were required 24/7 in order to see patients unless they were at the sales barn.  Paul was blessed to later have Don Ellis and Brad Peterson as partners. Paul was president of the SD Veterinary Medical Association in 1968.  He later served on the state licensure board and was Veterinarian of the Year.  Paul, who was raised on a farm, claimed he worked for the best people in the world.  He retired in his early 60’s and remained active for 20+ more years.

Paul was a member of Canton Lutheran church, sang in the choir, served on all its Boards and was a Steven Minister.  He also sang with the Grieg Male Chorus.  Paul enjoyed duck hunting, fishing, golfing, skiing, winters on Dauphin Island, traveling, playing cards with friends and many fun days at his cabin on Lake Brant.  He served on the boards of Canton-Inwood Hospital, the Canton Library, and others. Paul and his friends also organized the Canton Ski Club and developed the ski area east of Newton Hills.

Memorial services will begin at 1:00 p.m. Friday, November 22 at Canton Lutheran Church.  Private family burial will take place prior to the service.  Visitation will be Thursday from 2-7 p.m., family present 5-7 p.m., at Anderson Funeral Home in Canton.  In lieu of flowers, memorials may be directed to the Jim and Caroline Deinema Canton Community Foundation.