Visitation: Visitation will be Tuesday from 2-8 p.m., family present from 6-8 p.m. at Anderson Funeral Home in Canton. 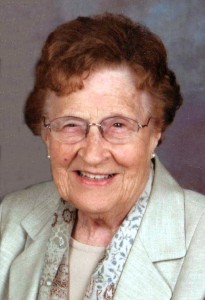 Opal Lorraine Ramse was born on May 29, 1921 in Canton, SD to John & Elsie (Aurit) Stengel.  She attended country school near Canton.  On November 15, 1941 she married Art Ramse at Canton Lutheran Church.  After marriage, the couple moved to Dayton, OH where Opal worked at a local canning factory.  They then moved back to SD to farm in the Lennox/Worthing area.  In the late 1960’s they began farming near Canton.  Upon retirement, they moved into Canton and for the last several years had lived at the Inn on Westport.

Opal was a wonderful farm wife and was known for cooking, especially her fried chicken.  She was a member of the Sons-of-Norway, ladies aid, and helped with 4-H.  She enjoyed gnomes, ceramics, her grandchildren, and playing cards, especially bridge.  She will be remembered as a kind and caring wife, mother, and grandmother who was always willing to lend a hand when needed.