Visitation: There will be no visitation.

Service: Her memorial service will be held at 11:00 a.m. Monday, July 13, 2015 at Christ the Victor Chapel at First Lutheran Church in Sioux Falls. 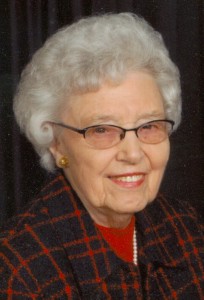 Mildred Sigrid Thompson, age 97, passed away on July 7, 2015.  She was born to Louis Cornelius and Hannah (Lang) Thompson on a farm near Schindler, in Lincoln County, S.D. on December 5, 1917.  She was baptized at Springdale Lutheran Church and confirmed at Canton Lutheran Church.  She graduated from Canton High School.  She attended the Lutheran Bible Institute in Minneapolis.  Back in Canton she worked for AAA (Agriculture Adjustment Act) and later was a deputy to the Register of Deeds in Lincoln County Courthouse.  Moving to Minneapolis she was employed at Lutheran Brotherhood Insurance Company and later in the home office of the American Lutheran Church (treasurer’s office and then in the office of evangelism).  She was at Allied Mutual Insurance Company for 12 years before she retired in 1989 and moved to Sioux Falls.  In 1990 she joined First Lutheran Church and was an active volunteer for the music department and folded bulletins.  She was a member of the Fidelis Circle and later the Martha Circle.  In her home, artifacts representing her Norwegian heritage were visible.  Early in her life she belonged to a square dance group and was a fan of the Minnesota Twins.  Mildred enjoyed travel in the U.S. going to Alaska and Hawaii as well as many other states.  In 1985 she visited Norway, Sweden and Denmark.  She also visited France, the Netherlands and Italy.  Well into her 90’s she was seen at the Center for Active Generations working out on a step machine.  Her most recent activities were to attend church, go to Bible Study and to read books and solve puzzles.

She is survived by nieces and nephews who live in Arizona and California.  She was preceded in death by her parents, two sisters Laura Bratlie and Helga Ivie, and two half-brothers Harold and Stanley Anderson.

Her memorial service will be held at 11:00 a.m. Monday, July 13, 2015 at Christ the Victor Chapel at First Lutheran Church in Sioux Falls.  Burial was at the Lutheran Cemetery near Canton.