Visitation: Visitation will be Monday from 2 to 8:00 p.m. at Anderson Funeral Home in Canton, with family present from 6 to 8:00 p.m. 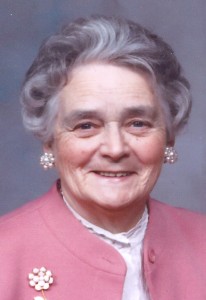 Mildred was born on June 17, 1920 at the farm home of her parents, Engebret and Clara (Hilmen) Hovrud, southwest of Worthing, SD.  She was born into a family of ten children.  She was baptized and confirmed at West Prairie Lutheran Church.  She attended Nelson School District #34.

On June 29, 1940, Mildred was united in marriage to Ernest Fossum at the Bethlehem Lutheran Church Parsonage, Inwood, Iowa by Reverend Habel.  They farmed their entire married life in Lincoln County, SD.  Her husband passed away on December 5, 1987.  Mildred was a long-time member of Canton Lutheran Church.

Those grateful for having shared her life are: two sons, Charles and his wife Lorene and Arlyn and his wife Joann of Canton; nine grandchildren; 19 great-grandchildren; sisters, Emma Rodvold and Vida Hitterdal both of Sioux Falls; sisters-in-law, Nila Olson of Centerville, Clarice (Fred) Haan of Chancellor, Ida Fossum of Lennox, and Erma Fossum of Canton; and numerous nieces and nephews.

She was preceded in death by her husband, parents, sister, Mary Hill, two brothers, Clarence and LeRoy, and also two brothers and two sisters in infancy.