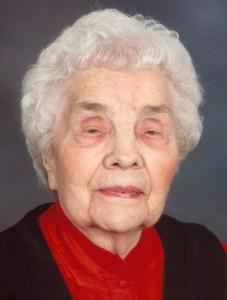 Mildred was born April 17, 1918 to Ole & Cora (Holter) Borneman in Canton, SD.  She attended Riverside Elementary School near Canton and graduated from Canton High School in 1936.  She worked 2 years at Vick’s Café in Canton before moving to Evanston, IL where she worked for Illinois Bell Telephone.  She returned home to work for NW Bell in Sioux Falls.  She also worked for Farmers State Bank and Molstad Drug.

Mildred was united in marriage to George A. Wallquist on September 1, 1945.  Together they farmed south of Canton for many years.  Later in life, they enjoyed winters in Texas and Arizona.  George passed away in March of 1983.      Mildred married Harry G. Harries on April 20, 1991.  They lived in Green Valley, AZ until his death.  Mildred then returned to Canton and resided at the Canton Good Samaritan Center for 8 years.

Mildred was preceded in death by her husband, George; and brothers, Gerald and Donald Borneman.

Mildred’s family wishes to express their thanks for the loving care Mildred received from the staff of the Canton Good Samaritan Center and Asera Care Hospice.