Visitation: Visitation will be Thursday, Dec. 13, from 5 to 6:00 p.m. at Anderson Funeral Home in Canton.

Service: A service of remembrance will be held at 6:00 p.m. Thursday, Dec. 13, at Anderson Funeral Home. 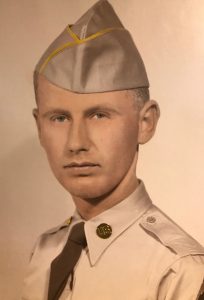 Merle J. Nelson passed away peacefully on December 5, 2018 at the Good Samaritan Center in Canton, SD. He was born to Peter and Juanita (Swenson) Nelson on December 9, 1931.

Merle grew up on the family homestead northeast of Canton and attended Banner School and Canton High School. In December of 1952, Merle enlisted in the United States Army. While in the Army, he was stationed in Germany with Field Artillery Battalions. He was discharged from the Army in November of 1954.

After his discharge, he returned to Canton where he farmed and worked for the ASCS. He will be remembered for his many stories, pride in his Norwegian heritage and love of his family.

Merle is survived by his brother Donald Nelson and many nieces and nephews and their families. He is preceded in death by his parents and sister Marjory Aasen.

A service of remembrance will be held at 6:00 p.m. Thursday, Dec. 13, at Anderson Funeral Home in Canton. Family will greet visitors an hour prior to the service.