Visitation: Visitation with family present will be Sunday from 2-4 p.m. at Shalom Lutheran Church. 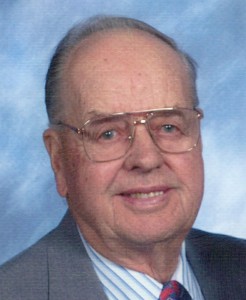 Melvin was born on August 24, 1923 on the family farm near Klondike, IA to Tobias and Inga (Ugland) Stensland.  He was baptized and confirmed at Our Savior’s Lutheran Church, rural Inwood, IA. He attended Klondike Country School.  He married Rose Marie Cox on February 12, 1949 in Luverne, MN.

Melvin farmed near Klondike with his brother Orville before moving to his farm northwest of Canton in 1955.  Melvin loved farming and especially his old red Farmall tractors.  Due to aging and health issues, he retired from farming at age 79.  “Road farming” became his pastime, often seen in his pickup with his farm dog beside him.  Doctors appointments in Sioux Falls with a daughter or son as a chauffeur meant more fields could be “road farmed”.  To this day, he was able to continue his cattle operation with the help of his son Richard.

Faith, family, and his Norwegian heritage were important to him.  He loved lefsa, potato dumplings, corn on the cob, watermelon, and Rosie’s cooking. At the age of 70 he had his first surprise birthday party. He also loved reading, especially farm journals and newspapers, and at the age of 90 got his first library card.  With his hearing loss it was easy to “get lost” in a good Western.

In lieu of flowers, memorials may be directed to Shalom Lutheran or the charity of your choice.