Visitation: Visitation will be Tuesday from 2 to 7:00 p.m. at Anderson Funeral Home in Canton, with family present from 5 to 7:00 p.m. 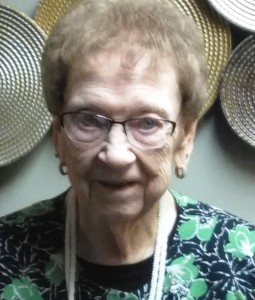 Mavis was born March 15, 1922, in Hoople, North Dakota, to Alvina and Clarence Gunderson.  Mavis was the oldest of six girls and attended the Hoople schools through high school.   She graduated from nursing training at Grafton Deaconess Hospital and was a member of the U.S. Cadet Nurse Corps.   After graduation she worked in Park River, ND.

When bowling one evening with her sister Elaine in Park River, North Dakota, fate intervened.  There she met Leonard Delvo.  They married June 26, 1949.  They lived in several towns in North and South Dakota before settling in Canton to raise their four children.   They spent many happy years together and provided a loving home for their family.

In Canton, Mavis worked at Canton-Inwood Hospital, Doctor Nutter’s practice, and the Good Samaritan Center.  She loved taking care of people.  You did not have to be special in ways of intellect, stature or beauty to be special to Mavis.  You just had to be kind.

Several years after Leonard’s passing, when dancing with friends at the Sioux Falls VFW, fate intervened again…or likely a true blessing.  There she met Marshall Gibson.  They married August 13, 1983.  They spent many happy years dancing, traveling and enjoying life in Canton and Mesa, Arizona.  They enjoyed their roles as grandparents/great grandparents to both families.