Visitation: A visitation will be held on Friday, June 29 from 2-8 pm, with the family being present from 6-8 pm, at Anderson Funeral Home in Canton, SD. 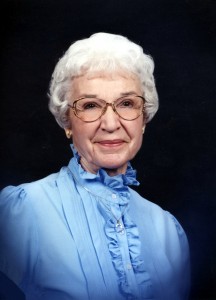 Florence Olive Marie Baty Fait, 95, recently of Henderson, NV, passed away June 21, 2012.  She was born November 20, 1916 on a farm near Canton, SD to Irwin and Mary Baty.  She attended the Grand Valley School.  Later, her folks moved five miles west of Canton and she attended Kersley School.

On November 10, 1936, she married Millard H. Fait and on November 10, 2006, they celebrated their 70th wedding anniversary!  During the first 4 years of their marriage, they lived in Beresford, SD and then moved to Pewaukee, WI for 3 years, returning to the Canton area in 1943.  Marie helped as a bookkeeper for the Fait Brothers Auto Body Shop and was a busy homemaker.  When Millard purchased the Fait Chevrolet Pontiac dealership in 1955, Marie became the full-time bookkeeper until they retired on May 1, 1983.

Millard & Marie moved to Henderson, NV in August, 2005 to be close to their two sons.  Marie was a wonderful woman of honesty and integrity and was gifted with a great sense of humor.

She was preceeded in death by her husband, Millard on October 7, 2007, two brothers, Durward Baty of WI, and Willard Baty of Denver; three sisters, Ruth Stefan of Canton, Ethel Mullinex of Canton and Leota Swanson of AR; and a granddaughter, Karlynda Most of Canton.

She is survived by their two sons, Richard A. Fait and Stephen M. Fait, both living in Henderson, NV.  Marie had 9 grandchildren and 8 great-grandchildren.  This was a woman who loved life and will be missed by all who knew her.

A visitation will be held on Friday, June 29 from 2-8 pm, with the family being present from 6-8 pm, at Anderson Funeral Home in Canton, SD.  Funeral services will begin at 10:00 am Saturday, June 30 at Anderson Funeral Home with burial immediately following at Forest Hills Cemetery.  In lieu of flowers, the family requests donations be made to the “LV Sertoma Deaf Scholarship Foundation”.