Visitation: Visitation will be Thursday from 4-8 p.m., family present 6-8 p.m., at Anderson Funeral Home in Canton.

Service: Memorial services will begin at 10:30 a.m. Friday, May 18 at Bethany Reformed Church in Canton. 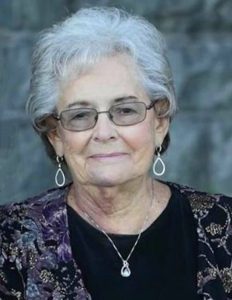 Marjorie “Marge” May Jones was born October 1st, 1928 in Muncie, IN to Maurice and Hazel (Chamberlain) Jones.

She graduated high school in Rock Valley, IA in 1946. She earned her teaching degree from Morningside College, and taught for several years in Sanborn, IA and later at a rural school in Settlers Township near Fairview, SD.

She married John Lems in June of 1950. They farmed southwest of Inwood, IA until 1958.  They then moved to a farm north of Canton, SD where they raised their six children; Debra, Susan, John Jr. Timothy, Robert, and Lisa.

Marge married Joseph Lutz in 1984. In 1990, she retired after 13 years at Sioux International and they moved to AZ to care for her mother after her dad passed away. Joe and Marge spent summers at their Lake Alvin home in Harrisburg, SD and winters in Mesa, AZ. Together they played keyboard and guitar with the band “Prairie Country,” and enjoyed watching the Phoenix Suns.  After Joe passed away in 2004, she resided in Sun Lakes, AZ.

Marjorie was an accomplished musician.  She played piano and organ at Harrisburg United Methodist Church for many years.  Marge loved her lemons and enjoyed baking, spending time with her children, grandchildren and friends, exercising at the pool, listening to music, having lunch with her brother Jim and visiting with her neighbor Margie.  The South Dakota Pasque flower (mayflower) was her favorite, and she enjoyed receiving pictures and pressed flowers each year from her family.

Marge passed away peacefully in her sleep at Lund Home Hospice in Gilbert, AZ on May 4th, 2018 at the age of 89.

Memorial services will begin at 10:30 a.m. Friday, May 18 at Bethany Reformed Church in Canton, SD.  Visitation will be Thursday from 4-8 p.m., family present 6-8 p.m., at Anderson Funeral Home in Canton.