Visitation: Visitation will be Wednesday from 2 to 8:00 p.m. at Anderson Funeral Home in Canton, with family present from 6 to 8:00 p.m.

Service: Funeral services will be at 10:30 a.m. Thursday, Jan. 12, at Bethany Reformed Church in Canton. 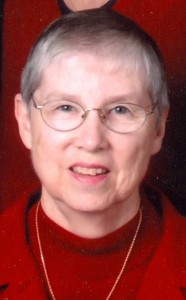 Canton.  Margaret Ann Brandsma, 81, passed away unexpectedly Saturday, January 7, 2017 at her home in Canton.  Funeral services will be at 10:30 a.m. Thursday, Jan. 12, at Bethany Reformed Church in Canton.  Visitation will be Wednesday from 2 to 8:00 p.m. at Anderson Funeral Home in Canton, with family present from 6 to 8:00 p.m.

Margaret was born March 9, 1935 in Lake Preston, SD to Gorden and Hazel (Eveland) Maxam.  She attended school in Lake Preston, graduating in 1953.  She then attended Northern State Teachers College in Aberdeen.  She began her teaching career in Canton in 1957.  She taught for a short time in Rapid City prior to her marriage.

Margaret was united in marriage to Allen Brandsma January 19, 1963 in Lake Preston.  They made their home in Canton before moving to the family farm north of Canton. She continued teaching in Canton until her retirement in 1998.  When Allen retired from farming in 2002, they moved to Canton.   She volunteered at Lawrence Elementary School and maintained many friendships made at the school.  She and Allen attended many of their grandchildren’s school activities in Clark and enjoyed traveling in their retirement years.  Margaret was an avid chocolate lover and an intense board game player.  She also cross-stitched, volunteered at the library, and delivered Meals on Wheels.  She was a member of the Eastern Star, SDEA, NEA, and South Dakota Reading Council.