Service: Private graveside burial to take place on August 4, 2020, followed by a socially-distanced visitation for family and friends at The Canton Barn from 5-7 p.m. 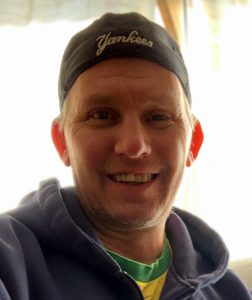 Marc John Wolthoff, 49, passed away suddenly July 13, 2020 at his home in Chicago, IL. Marc was born on July 20, 1970 in Sioux Falls, SD to Virgil and Linda (Schell) Wolthoff.  He was baptized and confirmed at Canton Lutheran Church.  Marc graduated from Canton High School in 1989 and attended the University of South Dakota where he received his undergraduate and graduate degrees.  Marc was a member of the Beta Theta Pi Fraternity-Gamma Alpha Chapter (USD). He moved to Chicago, IL in 1997 when he accepted a pharmaceutical sales position with Eli Lilly. He continued with his pharmaceutical career with MedPointe and Boehringer Ingelheim.  With his love of music and the entertainment scene, Marc developed a side business “mar – key productions” which brought DJ’s and entertainers into the Chicago area nightclub scene.

Marc will be remembered as a people person and being able to strike up a conversation with anyone. His interest in people and their well-being combined with an outgoing personality served him well both in his professional and personal life.  An enthusiastic traveler, Marc visited many countries including: Australia, Brazil, Spain, Portugal, and Mexico.  He was a proud dog dad to Simba, Dakota, and Timon.

A funeral mass was held for Marc at St. Gertrude Catholic Church, Chicago IL on July 20, 2020.  Private graveside burial to take place on August 4, 2020, followed by a socially-distanced visitation for family and friends at The Canton Barn from 5-7 p.m.