Visitation: Visitation will be Tuesday November 19 from 2-7 p.m., family present from 5-7 p.m., at Anderson Funeral Home in Canton. 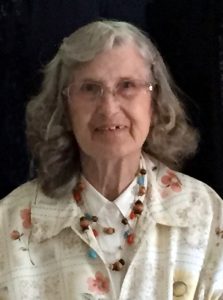 Lucille Helen Stuckey, 87, went home to live with the Lord on Saturday, November 9, 2019.  Funeral services will begin at 10:00 a.m. Wednesday, November 20 at First Baptist Church in Canton.  Visitation will be Tuesday November 19 from 2-7 p.m., family present from 5-7 p.m., at Anderson Funeral Home in Canton.

Lucille was born February 19, 1932 to Albert and Julia (Bokker) Roskam in Dell Rapids S.D. The family moved to a farm near Henry S.D. when she was 8 years old. She graduated from Henry High School in 1950. She married Rolland Stuckey on June 22 1952. They began raising a family of 8 children in Sioux Falls then moved to an acreage south of Harrisburg in 1972. Rolland retired and they moved to Canton in 2001.

She and Rolland enjoyed dancing with the Dakota Bandits Square Dance Club. She enjoyed sewing and made most of her square dance dresses to match Rolland’s shirts.

Lucille worked for 25 years as a houseparent at the Children’s Care Hospital and School while also volunteering at the Union Gospel Mission and the RSVP organization until she retired in 2015.

Lucille was a faithful member of the First Baptist Church in Canton.

Lucille’s request in lieu of flowers is that memorials be made to Gideon’s International.