Visitation: Visitation will be Thursday, from 2-7 p.m., family present from 5-7 p.m., at Anderson Funeral Home in Canton. 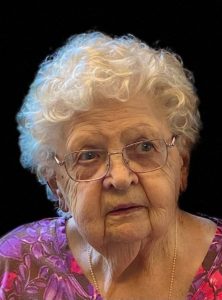 Lucille Sorenson, age 93, died Saturday, August 7, 2021 surrounded by her family at Ava’s House in Sioux Falls, SD.  Funeral services will begin at 11:00 a.m. Friday, August 13, 2021 at Redeemer Free Lutheran Church in Canton, SD.  Visitation will be Thursday, from 2-7 p.m., family present from 5-7 p.m., at Anderson Funeral Home in Canton.  Memorials may be directed to the charity of your choice.

Lucille was born on June 21, 1928 in Beaver Creek, MN to Henry and Clara (Bruemmer) Hartmann.  She graduated from Brandon High School in 1945, where she was active in the chorus, plays and the school newspaper.  She married Quintin Sorenson on March 15, 1947 at East Side Lutheran Church in Sioux Falls, SD.  She was baptized at Our Savior’s Lutheran, Inwood, IA at the age of 19.  The couple lived in various communities in Iowa, South Dakota and Minnesota before buying a farm north of Canton, SD in 1968.  In addition to helping farm and raise her children, Lucille worked at Manchester Biscuit Company, Sears, Morrells, Rushmore Café, Otis Radio, Hiawatha Golf Club, and Canton Livestock Café.   The couple retired and moved to Canton in 2004.  They moved to Washington Crossing in Sioux Falls, SD in 2015.  Quintin died on November 8, 2020.

Lucille enjoyed crocheting, bowling, hardanger, spending time with her family and playing mahjong, scrabble, and bingo.  She will be remembered for her pies, especially her sour cream raisin pie. The couple also enjoyed wintering in AZ for many years.  She was a member of Redeemer Free Lutheran Church and a lifetime member and past president of the Canton VFW Auxiliary.