Visitation: Family will greet visitors Wednesday evening from 6 to 8:00 p.m. at Anderson Funeral Home in Canton.

Lorraine B. Mercer, 87, formerly of Canton, passed away Saturday, June 7, 2014 at Morningside Manor in Alcester, SD.  Her memorial service will be at 2:00 p.m. Thursday, June 12, 2014 at Bethany Lutheran Church in Fairview, SD.  Family will greet visitors Wednesday evening from 6 to 8:00 p.m. at Anderson Funeral Home in Canton.

Lorraine was born to Victor and Carrie (Amundson) Nelson on June 13, 1926 at Hudson, SD.  She was baptized and confirmed in the Lutheran faith.  She attended a one-room country school and graduated from Hudson High School in 1944.  After she received her Elementary Education teaching certificate from Augustana College, she taught at Egan, SD, Rock Valley, IA, and Lawton, IA.

She married Lloyd Mercer on May 27, 1951 at Hudson Lutheran Church.  They were married 62 years.  After living near Lawton and Sanborn, IA, they moved to the Fairview area, where they farmed until 1965 when they moved to Canton.  Lorraine worked at the Canton School Cafeteria for 23 years, retiring in 1991.

She enjoyed reading, crocheting, cooking, painting, several other hobbies, and her friends.  She cherished spending time with her grandchildren and great-grandchildren, whom she loved very much. 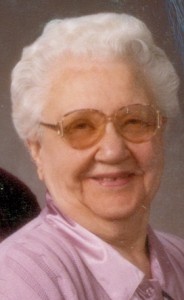