Service: A private family graveside service will be held. 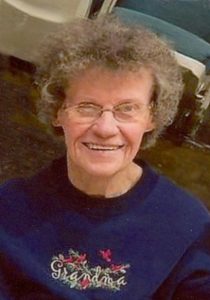 Loretta was born on December 10, 1933 in Minburn, IA, the 3rd oldest of 11 kids, to John Emery and Myrtle Madonna (Wagaman) Welch.  She grew up in Minburn, graduating from Minburn High School in 1951.  She married Daryl Halling on December 16, 1951 in Minburn.

While Daryl served in the Air Force overseas, Loretta lived and worked in Des Moines until reuniting with Daryl at Warren Air Force Base in Cheyenne, WY.  After his discharge, the couple farmed in IA with family, moved to the Chicago area in 1960, and moved to Canton, SD in 1965.  In addition to raising her family, Loretta worked as a bookkeeper in the Canton High School Business Office for many years.

Loretta was a lifelong caretaker.  She cherished spending time with her family and enjoyed attending her children’s and grandchildren’s events. She loved working in her yard, mowing, tending to her roses, shoveling snow, and accompanying her husband on VFW functions.  She was also an active member of the Canton VFW Auxiliary and longtime member of Canton United Methodist Church.

As with many women of her generation, she loved cooking up a big feast for family gatherings. Many family get togethers ended with her famous from scratch chocolate cake & cooked frosting. If you were special in her life you may have had either the cake or brownies, with the cooked frosting, made especially for you.