Service: Her memorial service will be held at 3:00 p.m. Saturday, Dec. 10, at Heritage Funeral Home in Sioux Falls. Inurnment will be at Forest Hill Cemetery at Canton, SD. 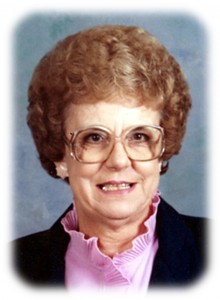 Lola Sunde, age 92, of Sioux Falls, SD, passed away on Wednesday, December 07, 2011 in Sioux Falls at Ward Assisted Living.  Her memorial service will be held at 3:00 p.m. Saturday, Dec. 10, at Heritage Funeral Home in Sioux Falls.  Inurnment will be at Forest Hill Cemetery at Canton, SD.
Lola Mushrush was born April 11, 1919 at Lake Park, IA to James and Bessie (Higley) Mushrush. She received her elementary education in Lake Park and graduated from Excelsior High School near Lake Park.
Lola married Rudolph Sunde of Larchwood, Iowa in 1939. They were blessed with two daughters, Judith Marie and Barbara Kay. Judith died in a car accident in 1959. Rudy and Lola moved to the family farm in Canton in 1943 and then moved to Sioux Fans in 1958. Lola was a wonderful and caring wife and mother. She enjoyed cooking for her family, dancing, reading, sewing and fishing. She always made things fun when you were with her. Lola was a member of the Eastside Lutheran Church, the Moose Lodge and the VFW. She worked for 18 years at the Valley National Bank and then other various jobs and later at the Court House Museum in Sioux Falls. Lola’s bright smile and fun attitude will be missed by many.
Lola was preceded in death by her parents; her husband, Rudy, in 1972; her daughter, Judith, in 1959; six brothers: Raymond, Edward, Lloyd, Don, Gordon and Bill; and three sisters: Faye Klesoth, Georgia Dyhrkoop and Margie Sylvester.Left to cherish her memory is her daughter, Barbara (Dave) Sherron of Sioux Falls and many nieces, nephews and friends.