Visitation: Visitation, with family present, will be Sunday from 2-4 p.m. at Bethany Reformed Church. 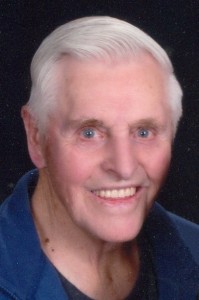 Leonard was born on December 23, 1930 in Lyon County, IA to Anthony and Sophia (Rozeboom) Roskam.  He married Harriet Van RavenHorst on May 25, 1954 in Sioux Center, IA.  The family lived and farmed in Lyon and Sioux County before moving to a farm north of Hudson, SD in 1973.  Leonard retired from farming in 2000.  The couple moved to Canton in 2013 due to Leonard’s failing health.

Leonard enjoyed horse shoe pitching and entered many tournaments.  He is enshrined in the  Horse Shoe Hall of Fame.  He also liked to bowl, and later taught himself to bowl and throw horseshoes left-handed due to his Parkinson’s disease.  Leonard was active in his church, sang in the Men’s Quartet, and followed his children’s and grandchildren’s activities.  He was a member of the Eden Township Board, the Hudson Legion, and supported the Sioux City Union Gospel Mission.