Visitation: Visitation will be Thursday from 2-8 p.m., with family present from 5-7 p.m., at Canton Lutheran Church. 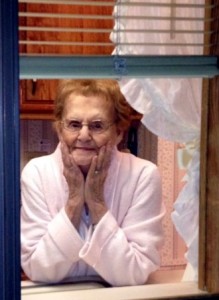 “Have you eaten? What can I make you?  You need to eat. Just eat this.” Leona Wiebe Hill may have uttered these words over a trillion times to her family, friends & friends of friends of friends. Born September 23rd, 1926 in George, IA to William & Marie Wiebe & later moving to Beloit, IA with her 4 sisters & 3 brothers, Leona was witness to the little food that era often saw & pledged that would not happen on her watch.

In 1945, the spunky red head, while working at the local café, was artfully negotiating with her brother Eddie to get a new coat, when a dapper young lad, Manfred Hill, was clearly impressed & offered to buy her the coat. The rest, folks, is history. Married May 6th, 1945, the two went on to have 5 beautiful children. Manfred & Leona farmed & raised seed corn in and around Canton, SD. They were also part owners of First American Bank in Canton, Leona was the cute little “Grandma” standing on a box so everyone could see her beautiful smile.

Leona was known for the extensive meals she would prepare for all-nothing short of a thanksgiving meal each & every day. Giving & doing for others was second nature, a treasured characteristic. Her energy was boundless & whether she was walking or bustling down a country road on four wheels, her five foot nothing stature was getting the job done & doing it Leona style-fast, efficient & with a side of wit.

The Hill duo had 15 grandchildren in a 15-year span. A lesser grandma may have struggled with making them each feel as if they were the one & only handpicked grand baby, but not Grandma Onie (her name to many), the intense love, concern & admiration she had for her grandkids was extraordinary & immeasurable. Her kitchen stayed warm as she prepared meals-thanksgiving style-each day for her lucky grand kiddos & their friends of friends of friends of friends as they took turns passing through the junior high & high school years. The tradition continued as the years faded to her great-grandchildren. There would be no way to count the number of mouths fed by Grandma Onie & the love extended in each of those meals.

Manfred & Leona traveled extensively to Norway for many years making heaps of friendships that they treasured. They spent winters in Mesa, AZ & were blessed with a loving community of friends & family there. Their countless friends visited so often that their home was coined the Hill Hotel & Limo.