Visitation: Visitation will be Thursday from 2-8pm, family present 6-8pm, at Anderson Funeral Home in Canton. 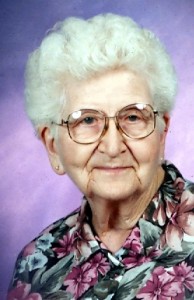 Lenore Beatrice Monen was welcomed to her heavenly home on Monday, April 22, 2013 at the age of 96. Funeral services will begin at 10:30 a.m. Friday, April 26 at Our Savior’s Lutheran Church, rural Inwood, IA.  Visitation will be Thursday from 2-8pm, family present 6-8pm, at Anderson Funeral Home in Canton.

Lenore was born March 17, 1917 on the family farm near Canton, SD to Ole and Gunhild (Orstad) Aasheim, the third of seven children.  Her mother died when she was young so she helped raise her younger siblings.

She met the love of her life, Gidvert Monen, at the Arkota Ballroom in Sioux Falls, and they were married in July of 1944.  Together with her husband she raised their 4 children, Loren, twins Verne and Vivian, and Roger, as well as Gidvert’s 2 sons, Donnie and Gene.

As a young woman, she worked as a housekeeper for Dr. Stenberg.  She later was employed at McKennan Hospital and then at Sioux Valley Hospital for many years until Gidvert had a stroke.  Then she turned her full attention to tending for him.  After he died, she started working at Luther Manor in Sioux Falls.  She finally retired at the age of 83.

When you consider that the value of a person is how they live between Sundays, Lenore was certainly more valuable than most.  She was patient, kind and hard working woman.  She was never envious, but instead was content and acceptant of whatever life held for her.  She never spoke harshly and she was slow to anger.  “Colorful” language was never in her vocabulary.  When she needed an explanatory word it was usually “uffda”.  She always put others first.  She was truly a servant.  She will be deeply missed.

Left to cherish her memory is Vivian LaRoche, Sioux Falls, Verne Monen, and his daughters, Leah and Sarah, and Roger Monen (Cheryl), Lester, IA and their three sons, Brian, Adam, and Mitchell, and Loren’s children, Elias Monen and Della DeSchepper.  She is also survived by her step-son, Gene, Portland, OR and her sister, Lillian Hanson, Canton, SD; 15 great-grandchildren; 8 step grandchildren and many nieces and nephews.

She was preceded in death by her husband in 1979, her son, Loren in 2009, grandson, Jordan in 2011, her parents and five siblings, Walter, Henry, Esther Mydland, Alma Van Bockern, and Gladys Vander Meer.  Blessed be her memory.