Service: Funeral services will be at 10:00 a.m. Thursday, March 28, at Canton Lutheran Church, with burial at Richland Cemetery near Inwood, IA. 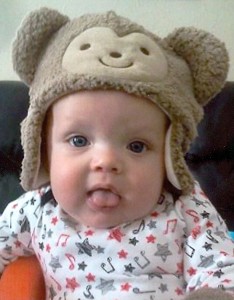 Layne Alvin Swier passed away peacefully in the arms of family on Monday, March 25, 2013 in Sioux Falls, SD. Funeral services will be at 10:00 a.m. Thursday, March 28, at Canton Lutheran Church, with burial at Richland Cemetery  near Inwood, IA.  Visitation will begin at 9:30 a.m.

Layne was born on August 18, 2012 to Marie Swier.  Although his life was a brief gift to us, he touched everyone he met with his big warm smile and bright beautiful blue eyes.  Layne was such a happy baby whose laughs captivated the room and smile melted mommy’s heart.

Layne loved listening to music, especially with his uncle Jakob.  His favorite bedtime song was “Tonight Tonight” by the Smashing Pumpkins.  Booger Butt was unstoppable in his walker, his hanger in hand and grandma’s knick-knacks in sight.  Layne loved being held close by grandpa.  Their bond was so extraordinary that Layne had a special hug for grandpa only.  Besides his grandpa, his other best friend was his kitty, Fritz.