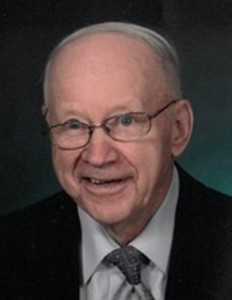 Kenneth Selmer Knudson, son of Sivert and Emma (Haugland) Knudson, was born on January 5, 1921 at Inwood, Iowa.  He attended rural schools in the area. Ken was united in marriage with Beatrice Viola Johnson on August 20, 1949 and three children were born to this union.

Ken farmed most of his life until he retired in 1986. He was a great family man and a loving father. He was deeply involved in his church, Our Saviors Lutheran in Inwood and later Zion Lutheran in Manning.  He led Bethel Bible Study and was a youth sponsor. Through the years Ken enjoyed traveling. He also loved music and played several instruments. Ken’s family and friends will always remember him as a man who loved to laugh and socialize.

In 1994 Ken was united in marriage with Dorothy Grundmeier and the couple resided in Manning.  When his health began to fail Ken moved to the Manning Plaza Nursing Home.  He died there on Saturday, February 24, 2018, at the age of 97 years, 1 month and 19 days.

Funeral services will begin at 1:00 p.m., Thursday, March 1, 2018 at Our Savior’s Lutheran Church rural Inwood, IA with private family burial to follow in the church cemetery.