Visitation: Family will greet visitors at 1:00 p.m. Saturday in the Fellowship Hall at the church. 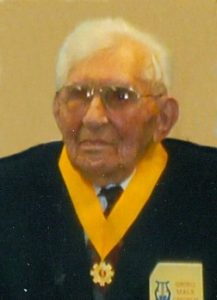 Julian was born on the Holter homestead where he was privileged to live his first 100 years of his life; the first born of Thorsten and Inga (Olson) Holter.  Julian moved to the Canton Good Samaritan Center on June 22, 2016.  Through the 8th grade, Julian attended Grand Valley Rural School, which was built by his grandfather Jacob Holter.  He graduated from Augustana Academy in 1937.  On December 20, 1942, Julian was united in marriage to Verna Brynjulson at Grand Valley Lutheran Church, celebrating their 76th wedding anniversary in 2018.  This union was blessed with one son, Jerome (Jerry) Holter and two foster sons, Donald and Daniel Sparks.

Julian began his lifelong farming career in 1935, following the death of his father, farming with his brother Laurel and later son Jerome.

He was a lifelong member of Grand Valley Lutheran Church, where he was baptized, confirmed, and married.  He served in several capacities at Grand Valley including church council, Sunday School Supt. and teacher, and choir director and member.  Julian served on the Augustana Academy Board, 40 years as Canton Township Clerk, was a member of the South Dakota Farmers Union since 1938, holding several local, county, and state offices, and was a lifetime member and instrumental in organizing the Rural School Historical Society.

Proud of his Norwegian heritage, Julian was a member of the Kong Olav V Sons of Norway Lodge.  An active member of the Greig Male Chorus for 82 years, since 1936, he was the last charter member.  Julian enjoyed vocal solo performances in the choir and community.  He performed his last solo on Dec. 17, 2018.  Julian was also a member of the Sioux Valley Singer Assoc. and the Norwegian Singers Assoc. of America since 1936, attending his first NSAA National Sangerfest in 1938.

He was the proud recipient of the three diamond gold medallion medal representing 35 biennial sangerfests over 70 years, the first to receive this honor.

He was preceded in death by his parents, foster sons, Donald and Daniel Sparks; brother and sister-in-law, Laurel and Woodie Holter; sister, Ilva Holter; and brothers-in-law, Willis Towne, Robert Brynjulson, and Harlan Brynjulson.

Julian will long be remembered for the passion he held for his Christian faith, his family, farming, and music.

In lieu of flowers, memorials may be directed to the Grand Valley Building Fund or the Canton Good Samaritan Courtyard Project.