Service: Services will be held at St. Paul's Anglican Church in Crownsville, MD on Friday, April 16, 2021 at 1:00 p.m. Inurnment will be privately held at Arlington National Cemetery at a later date. 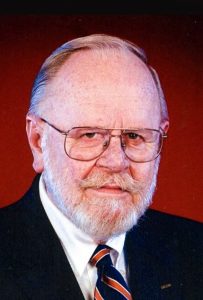 John Clifford Vickerman died on April 2, 2021 of natural causes. Following service at the Ford and Nixon White Houses and the Small Business Administration, he became an association executive, managing a number of trade and health groups.

Vickerman was born on November 7, 1937, in Canton, SD, to Clifford E. and Eva (Carlson) Vickerman. He graduated from the Canton Public Schools and attended Augustana College in Sioux Falls, SD, where he sang in the Augustana Choir, beginning a lifetime of choral singing. After two years at Augustana, he transferred to the University of Missouri School of Journalism where he sang with the Missouri Singers, including a performance under Robert Shaw. He appeared at Carnegie Hall twice.

Vickerman received a Bachelor of Journalism degree in 1959 and entered the U.S. Navy as a Seaman Apprentice Officer Candidate. He was commissioned as an Ensign at Naval OCS in Newport, RI in February 1960, and was assigned to the Naval Security Group in Washington, DC, and then at Ft. George G. Meade in Maryland. He was awarded the Secretary of the Navy’s commendation medal and was promoted to full Lieutenant in the reserves.

He was married to Diana Lee Dornan, the daughter of John and Ruth Dornan in Corning, NY in 1964.

After three years of active duty, he returned to South Dakota, where he attended graduate school in political science at the University of South Dakota.

He then joined the campaign staff of the governor-candidate Nile Roe as director of public relations, and after a successful primary election he returned to Canton as Editor and part-owner of the weekly Sioux Valley News. When the other owners decided to sell the paper in 1968, he joined them, and then joined the Republican Senate Campaign of former Gov. Archie Gubbrud as PR Director. When the campaign was unsuccessful, he came to Washington to join the staff of U.S. Representative Ben Reifel.

For a time, he served concurrently as acting director of the South Dakota SBA office, resigning both positions in 1972 to run for Congress in the old First Congressional district. He received the Republican nomination but was unsuccessful in the general election. However, the Nixon administration brought him back to Washington as one of the four principal deputies in the White House Personnel Operation, where he handled political appointments and Presidential nominations in a number of agencies and Cabinet departments.

He then became the Chief of Staff for Presidential Counselor Anne Armstrong. Following the resignation of President Nixon, he became Director of Business and Trade Association Liason in the Office of Public Liason, working with a large number of trade associations.

Following the 1976 elections, he joined the American Society of Association Executives as ASAE’s first director of public affairs, handling government relations and public relations, as well as international conferences. He spent four years at ASAE, leaving to form his own firm, The Association Company, or TAC, in 1981.

Visitation will be held at Barranco Funeral Home in Severna Park, MD on Thursday, April 15, 2021 from 3:00 – 7:00 p.m. Services will be held at St. Paul’s Anglican Church in Crownsville, MD on Friday, April 16, 2021 at 1:00 p.m. Inurnment will be privately held at Arlington National Cemetery at a later date. In lieu of flowers, memorial contributions may be made to the Wounded Warrior Project at https://www.woundedwarriorproject.org/.