Visitation: Visitation will be held at All Saints Catholic Church in Eagle Butte on Monday, July 9 from 1:00 – 2:00 p.m. (mountain time), with a Scripture Service at 2:00 p.m. She will be laid to rest next to her husband Steve at the Eagle Butte Cemetery.

Service: A mass of Christian Burial will be held at Avera Prince of Peace Sacred Heart Chapel in Sioux Falls on Sunday, July 8 at 2:00 p.m. 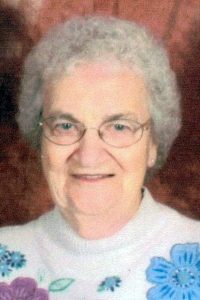 Jeanne Shupick peacefully passed away on July 5th, 2018 surrounded by her loving family at the Dougherty House at Prince of Peace Retirement Community in Sioux Falls, SD. Jeanne was born on November 10, 1924 in Faith, SD to Lloyd and Daina Dunbar. She was the oldest of 3 children, and spent most of her early life in the Dupree and Faith SD area. After high school, she moved to Mitchell, SD to attend St. Joseph Nursing School, where she graduated as a Registered Nurse in 1947 with her Diploma in Nursing as part of the United States Cadet Nurse Corps.

After nursing school, she moved to Dupree and became the Ziebach County Health Nurse. There, she met the love her life, Steve Shupick, who she married on October 11, 1947. Steve and “his bride” shared 66 beautiful years of marriage together before Steve’s passing in 2014. Their marriage was adventurous, to say the least, mostly due to the blessing of 10 children to their family! They enjoyed traveling across the United States with friends and also visiting their adult children and families later on in life. One of their most exciting travel adventures included a trip to Italy for their 25th wedding anniversary with some of their dearest friends. More than anything, they loved family reunions and seeing their family together as one. Many fun times where shared at the Shupick Ranch celebrating with barn dances, creating new memories, sharing lots of laughter, but most importantly, sharing love and enjoying each other’s company.

Jeanne led a very full life as a nurse spanning over 40 years. 17 of those years were with Indian Health Services in Eagle Butte, SD. Her passion for nursing and caring for her community was evident, even off duty. She was often a second mom to many, a social worker, a counselor, and a wonderful friend, all of which led her to being named Eagle Butte’s citizen of the year. Jeanne also stayed quite busy being the wife of a rancher and raising ten children. She was a member of All Saints Catholic Church in Eagle Butte and was an active member of the Altar Society as well.

The majority of Jean’s life was spent on the farm/ranch in Eagle Butte, SD.  In 2008, Steve and Jeanne moved to Prince of Peace Retirement Community in Sioux Falls. There, Jeanne stayed busy with numerous activities and also being an active member in Prince of Peace Catholic Church. Jeanne was definitely a social butterfly and was well known amongst the community. She would tell anyone how much she enjoyed living at Prince of Peace.

Anyone who ever had the opportunity to meet Jeanne was definitely blessed. Jeanne was the most caring, compassionate, selfless and loving wife, mother, grandmother, and friend you have ever met. Whether it was the gift of one of her beautifully crocheted afghans, handmade clothing, or a home cooked meal, Jeanne always put others before herself. I’m sure her grandchildren could tell a few stories about fresh chocolate chip cookies in the cookie jar, to homemade doll clothes, or how she always told you how proud she was of you! Jeanne was full of the best hugs and kisses a mother or grandmother could have!

Jeanne was welcomed into Heaven by her loving husband, Steve, daughter Sharon, son Tom, and her first grandchild, Stephanie Jean. She was also preceded in death by her parents, and her brother, Bill Dunbar.