Visitation: Visitation will be Friday from 2-7 p.m., family present 5-7 p.m., at Anderson Funeral Home in Canton. 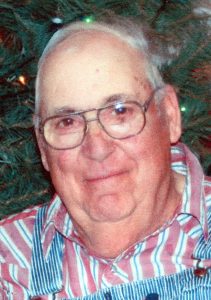 Howard was born on October 20, 1935 to Milford and Ethel (Mitchell) Beer in Canton, SD.  He grew up in Canton, graduating from Canton High School in 1953.  After serving in the National Guard, he married Martha Breugem on November 4, 1956 in Hudson, SD.  The couple lived, farmed, and raised cattle and hogs near Canton before moving into town for a short time.   During this time, Howard drove truck for Souvignier’s.  The couple moved to their present farm in 1966 where he farmed and raised hogs until his death.  Howard worked at Hunting Elevators for several years before purchasing the Canton Locker in 1975.

Howard enjoyed working with his family at the locker, farming, visiting and telling stories, hunting, and sitting on his tractor.  He treasured time spent with his granddaughters, especially watching them show livestock.  He was a regular for breakfast at Laurie’s Café and looked forward to Sunday breakfast with his family.  In addition, he was a longtime member of the Canton Lions Club and Canton Fire Department.

Howard is survived by his wife of 62 years, Martha; son, Wayne (Marcy) Beer, Canton, SD; granddaughters, Amy (Kevin) Olfert and Ashley (Ryan) Drietz; a future great-grandson due in August; sister, Ruth Thompson, Huron, SD; along with numerous extended relatives and friends. He was preceded in death by his parents and daughter, Kathy.