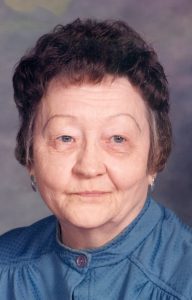 Helen Ness, age 94, passed away on Monday, October 26, 2020 at the Good Samaritan Society Canton. Private family services will be held.

Helen was born on April 6, 1926 on a farm outside of Lennox, South Dakota. She subsequently married Carl Ness, Jr of Canton, South Dakota on February 26, 1948 in Luverne, MN.  Together, in Canton, they raised three children; Diane Rose, Karen Sue, and Richard Carl.

In keeping with her kind and patient nature, Helen was a caregiver most of her life.  After raising her three children, she played a central role in helping to raise her two grandchildren, watching them before and after school and during summers off until they were in high school.  For many years, she also ran a daycare service helping to nurture others’ children in addition to her own. Helen had a deep passion for music of all kinds, but especially country music. As a young woman, she loved to dance and adored the Grand ‘Ole Opry. She was fond of flowers and kept a garden most of her life. Helen loved to joke and appreciated life’s many subtle ironies and joys, and was able to help others foster a similar sense of wonder. Helen was deeply and profoundly loved by all who knew her. She will be likewise missed.

She was preceded in death by her parents Richard and Susan “Swannie” Nordman of Lennox; her sisters Jenny Jennings and Emma Menholt; and her daughters Diane Ness and Karen Ness. She is survived by her brother John Nordman and her sister Loretta Randall, both of Sioux Falls. She is also survived by her son Richard Ness, his wife Irene, her granddaughter Kelly Gaffer and her husband Eric, her grandson Matt, and two great-grandchildren, Prudence Petunia and Jude Jarvis Gaffer – all of Canton, South Dakota.