Visitation: Visitation will be Friday from 2-4 p.m. at Anderson Funeral Home in Canton. Visitation will resume, with family present, at St. Dominic’s from 6-8 p.m., with a 7 p.m. prayer service. 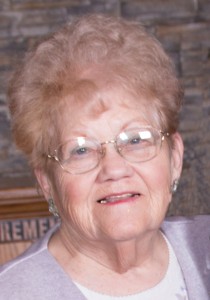 Helen D. “Fluffy” McCann, age 87, died Wednesday, June 3, 2015, at Dougherty Hospice House after suffering a heart attack.  Mass of Christian Burial will begin at 10:30 a.m. Saturday, June 6th at St. Dominic’s Catholic Church, Canton, SD.  Private family burial  at Forest Hill Cemetery will follow the service and lunch.  Visitation will be Friday from 2-4 p.m. at Anderson Funeral Home in Canton.  Visitation will resume, with family present,  at St. Dominic’s from 6-8 p.m., with a 7 p.m. prayer service.  In lieu of flowers, please direct memorials to the charity of your choice.

Helen was born on October 12, 1927 on a farm near Cherokee, IA to Herb and Sophia (Erdman) Lynn.  She attended country school near Cherokee and began high school in Schaller, IA.  Her family moved to Lismore, MN, where she graduated from Lismore High School and met her future husband, Bill McCann.

Helen married Bill on January 12, 1946 in Camp Pickett, VA.  Helen worked on the base post office before the couple moved to Minneapolis, MN for Bill’s schooling.  The couple moved to Bridgewater, SD in 1948 and began to raise their family.  The family moved to Canton, SD in 1968, where she resided until her death.

Besides raising 7 children, Helen worked as a seamstress for many years.  She was also a very active member of St. Dominic’s Catholic Church.  She enjoyed flowers, fishing, rummages, coffee, playing mahjong, and attending her grandchildren’s activities.  She was a member of the Canton Lion’s Club and was active in the community.  She was an excellent cook and her pies and apple crisp were second to none.  Helen loved life and she will be remembered for knowing how to have a good time.