Visitation: Visitation will be Thursday from 4-8p.m., family present from 5-7p.m., at Anderson Funeral Home in Canton.

Service: Her funeral will begin at 2:00 p.m. Friday, March 17 at Bethany Lutheran Church in Fairview, SD. 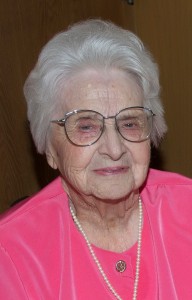 Hazel Sorum Larsgaard, 101, was born on June 25, 1915 to Edwin and Rena (Odegaard) Sorum on their farm in Fairview Township.  She was baptized and confirmed in the Lutheran faith.  Hazel attended country school at Pleasant Valley District 74.  She also attended three years a Fairview High School and one year at Canton High School, graduating in 1934.

On March 17, 1940 she was united in marriage to Roy O. Larsgaard at Trinity Lutheran Church rural Hudson, SD.  Together they farmed in Fairview Township and raised seven children.  An active member of Bethany Lutheran Church in Fairview, Hazel sang in the choir, directed the choir, taught Sunday school, and was the organist at Bethany for over 40 years.

Her days were spent raising her children and grand-children.  Gardening, baking, and crocheting were her main hobbies.  She was known to her grandchildren as “Cookie Grandma”.  Hazel passed away on Tuesday, March 14, 2017.